The Traditional Japanese breakfast served at Shizuka Ryokan exemplifies Japanese cuisine. Grilled salmon, hijiki seaweed, miso, pickled daikon radish, umeboshi plum and furikake seasoning are regular features around here. Not only are these foods delicious, they are beneficial to health.

Japan consists of 6,852 islands, so it is no surprise that a large part of the Japanese diet is fish. The nutrients and minerals found in pelagic fish—such as tuna, salmon and sardines—include omega-3 fatty acids, vitamin B12, phosphorus and selenium. The oily fish found in the Japanese meals served at Shizuka Ryokan is good for the brain and the heart. The Japanese also eat a lot of squid and octopus, foods high in an amino acid called taurine, that can lower blood pressure and cholesterol.

Most chronic diseases—for example diabetes, arthritis, heart disease and Alzheimer’s—are marked by high levels of inflammation. Studies show the omega-3 fatty acids present in oily fish reduce inflammation and can even help in cases of mild depression. Fish is rich in selenium, which plays a vital role in immunity, and Vitamin B12, which is great for the brain.

please note: At Shizuka Ryokan we cater for a wide range of dietary requirements, including veganism, vegetarianism, and coeliac disease. Our kitchen staff are trained in the preparation of delicious Japanese food within the parameters of special diets.

Many Japanese foods are fermented—think pickles, sake, miso and soy sauce. During fermentation foods go through a process of lacto-fermentation, in which bacteria feed on the sugar and starch in the food. Fermentation produces beneficial enzymes, B Vitamins, omega-3 fatty acids and probiotics. The digestive benefits of fermented foods are well known. Miso, the paste made from fermented soybeans and grains, contains millions of beneficial bacteria, minerals, vitamins B, E and K, and folic acid. One tablespoon of natto contains billions of Bacillus subtilis, a soil bacteria that can survive the high-acid environment of the stomach and go on to colonise the intestine. Scientists are interested in nattokinase, an enzyme formed during natto production, which has been shown to have blood-thinning actions. Also, natto contains high levels of Vitamin K2, which may help prevent osteoporosis.

In Japan, the rate of breast cancer is low. Japanese women consume a high amount of fermented soy foods including miso paste, tempeh and natto. Fermented soy foods are high in isoflavones—compounds that act as phyto-estrogens (plant substances that have a weak oestrogen-like effect in the body). Isoflavones are also known to increase bone density, and thus reduce the risk of osteoporosis. For this reason, a Japanese diet is useful during menopause.

The Japanese eat more seaweed than any other culture. Seaweed is rich in trace minerals that may be low in our everyday diet, such as iodine, zinc, magnesium, calcium and potassium.

The Japanese drink a lot of green tea. Green tea—especially a type called matcha—is high in polyphenols. Polyphenols are thought to have anti-carcinogenic and anti-inflammatory effects. Green tea is high in catechins, a type of polyphenol. Catechins can reduce the formation of free radicals in the body, preventing cell damage. Also, Japanese vegetables and herbs such as purple sweet potatoes, pumpkins and shiso contain large amounts of beneficial antioxidants.

Of course, the idea behind a healthy diet is to eat more protective foods and fewer damaging ones. And if you want to live to 100 there are other factors to consider such as: genetics, upbringing, how much exercise you get, how many friends you have, the climate where you live, the standard of healthcare you receive, whether you take onsen and naps and so on. But booking a holiday at Shizuka Ryokan, and eating Japanese food while you are here, is a good place to start!

Okinawa, a group of 161 islands in southern Japan, is said to include the largest proportion of people over 100 years of age anywhere in the world (about 33 per 100,000). In Okinawa rates of heart disease and stroke rate are very low, and breast and prostate cancer is extremely rare.

Researchers studied the people of Okinawa’s diet for 25 years to figure out if it was good genetics or diet that accounted for their health. Experiments showed that when people from Okinawa grew up in another country or abandoned the traditional diet they developed the same chronic disease risks as everyone else1. So, it is worth asking: what is the traditional Okinawan diet? Each day Okinawan elders eat seven serves of fruit and vegetables, seven serves of grain and two serves of soy. They also eat fish several times a week and their consumption of dairy and meat is minimal. Their mantra hara hachi bu means eat until you are 8/10ths full.

1 Since the Okinawa study, the life expectancy of men in Okinawa has plummeted from No. 1 in the world to No. 26. Older Okinawans who are eating the traditional diet still rank No. 1, but the younger generation are turning to Big Macs. 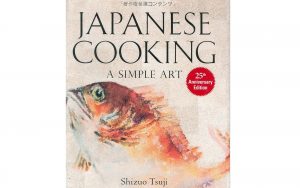 Vegetables From The Sea