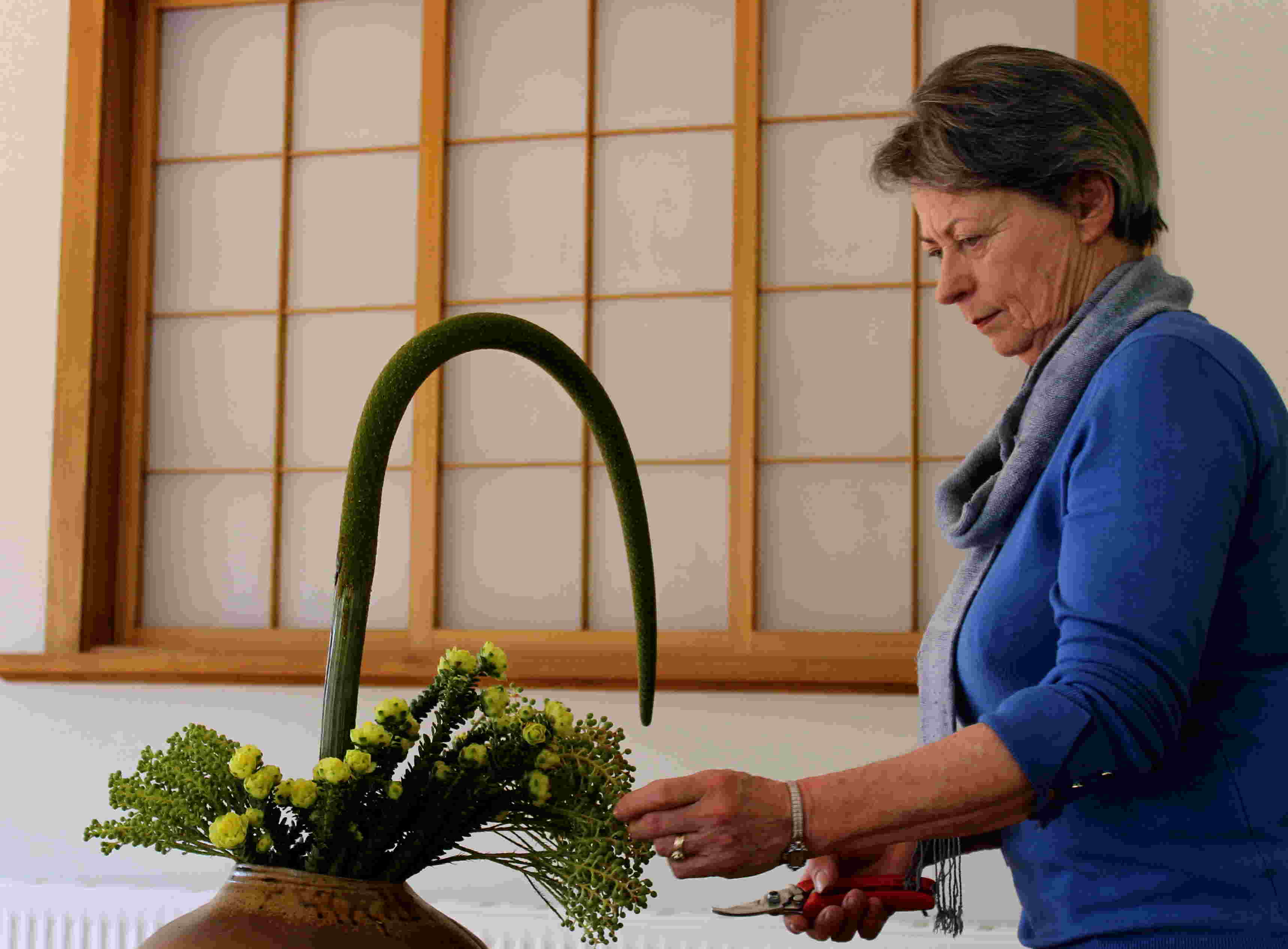 I’m at Shizuka Ryokan watching Trish Ward arrange plants in a Japanese ceramic vase destined for the coffee table. It is a Wednesday. Shizuka, closed for the day, is a hive of activity—there are deliveries for the kitchen, a Japanese yoga teacher meeting with the owner to plan a future workshop, a bearded artist up a ladder painting, a gardener, Cleo the dog, Hugo the horse, even a kookaburra on the deck. But despite the mayhem, Trish is calm and focused. She has entered the flow state.

Ikebana is the Japanese art of flower arranging. It dates back to 7th century Japan, when floral tributes were made at Buddhist altars. Later ikebana was displayed in the home. Guests at Shizuka Ryokan are often delighted to discover an ikebana floral arrangement in the tokonoma—alcove—of their room.

Trish is Shizuka Ryokan’s in-house ikebana practitioner and the mother of Shizuka owner Catherine Defina. Trish has been creating ikebana arrangements for over 20 years. She is a member of the modern Sogetsu school, founded in 1927 by Teshigahara Sofu and based in Tokyo.

Buddhist priests were the early ikebana masters and the art form was heavily influenced by tea masters. Trish says, ‘Samurai warriors used to do ikebana before and after battle to calm themselves. Women were not allowed to do it. It was a men-only thing.’

Plants play an important role in Trish’s life. Her home garden includes plenty of interesting flowers and foliage, ‘That is common among ikebana people. Whatever they grow, they think “ikebana”. The idea is to be able to go into your garden and just pick flowers and arrange them. It is as simple as that.’

Ikebana ties in beautifully with the awareness and appreciation of the seasons that underpins much of Japanese culture.

Norman Sparnon brought ikebana to Australia in the 1960s. Sparnon was born in Melbourne and as a youth became interested in Japanese culture. During World War II, he served in Japan under General Douglas Macarthur. After the war, he stayed in Japan for twelve years, studying ikebana under Kobayashi Sensei of the Einghin School and later with Sofu Teshigahara, founder of the Sogetsu School.

Sparnon returned to Australia, and dedicated the rest of his life to cultivating a cultural exchange between Australia and Japan. He lived in Sydney but would travel down to teach ikebana in Hawthorn Town Hall once a month.

Trish spent some time living in Indonesia, where she would see ikebana demonstrations at the American Embassy. ‘I quite liked it but with children I didn’t have time for such things.’ Years passed. Back in Australia, a friend took Trish to the American Embassy in Canberra for an ikebana demonstration and she was enchanted. Trish finally learned ikebana from a teacher called Teresa Feile in the Dandenong Ranges. Feile was a former student of Sparnon.

Trish is arranging a West Australian native as we speak. Trish has to select plants suited to the ryokan environment. ‘With the warmth in the guestrooms here, you need things to last.’ She points to a plant, ‘This is the Xanthorrhoea, the Grass Tree, commonly called Kangaroo Tail.’

Australian natives are a recent addition to the ikebana world, previously reliant upon European flowers. ‘There is a change in the whole culture. I think the Japanese use a lot of our natives so that has probably filtered through. But,’ Trish motions to the Grass Tree, ‘they are more difficult to use. There is lots of foliage on them. You’ve really got to thin it out because, in ikebana, less is more.’

‘I just get lost in it. You fiddle around. And the next thing, an hour is gone. You gradually get an eye for it.’

The ikebana on display at Shizuka is free-style. Aside from Australian natives, Trish also incorporates fruit or vegetables. The spa treatment room at Shizuka is sometimes perfumed by a citrus fruit called a Buddha’s hand, or enlivened by the bright orange of a persimmon. (The weirdest thing that Trish has used in ikebana is the head gasket of an old car.)

Ikebana is very different to western floral art but like other traditional art forms, it is only after you have mastered the basics that you can let your creativity run wild. The old adage ‘You’ve got to know the rules to break them’ applies here. Trish did strict formal arrangements for the first five years. ‘Even though you are doing free-style, you’re still going back to the basics—the shin-soe-hikae.’

Shin-soe-hikae are the three elements of an ikebana arrangement. Shin tends to be the longest branch, soe is medium length and hikae is the shortest and closest to the base.

We are very lucky to have Trish here at Shizuka Ryokan. She loves ikebana, ‘The colour, the shape, everything. It sort of all goes together.’

Ikebana International hosts annual exhibitions. The Sogetsu School exhibits at the Hawthorn Town Hall every year. You can also see Trish’s work every week at Seasons Restaurant at Cloudehill Gardens and every year at the Royal Melbourne Flower and Garden Show. 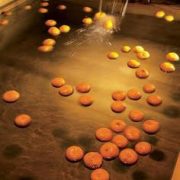 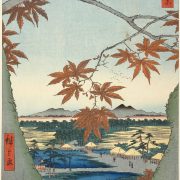 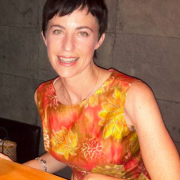 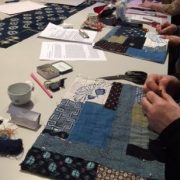 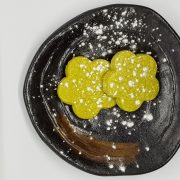 Food for healing workshop with Rieko Hayashi
Scroll to top