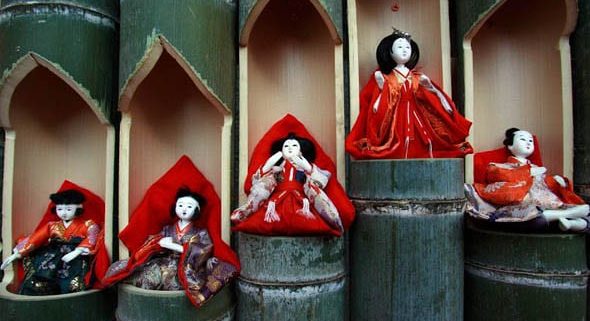 Hinamatsuri (雛祭), also known as Doll’s day or Girls’ Day, is celebrated on March 3. On this day, platforms—hinadan—are covered with red material and used to display ornamental dolls. The dolls represent the Emperor, Empress, attendants and musicians, in the traditional court dress of the Heian period.

Doll’s Day is known as a girls’ celebration, but this wasn’t always the case. Hinamatsuri was originally for all children, but girls’ love of playing with dolls shaped how the day is celebrated today.

Hinamatsuri originated in the Heian period (794 to 1185), a time in Japanese history when Buddhism, Taoism and other Chinese influences were at their peak. The Kojiki, or ‘An Account of Ancient Matters’, is a collection of myths published during the Heian period about the origins of Japan, and the kami, or spirits. The myths form part of the origin of many spiritual practices such as the purification ritual. The Kojiki tells a story where one of the mythical founders of Japan purifies himself in the river. This became the Shinto purification rite known as harae.

Harae was practiced by the imperial court. The Tale of Genji, a Japanese novel from the Heian period, mentions the third day of the third month as an auspicious time to perform purification rituals by throwing dolls into the river or ocean. The Onin War (1467-1477) spelled an end to harae at the imperial palace, but it was still practiced by the people and was popular at Shimogamo Shrine in Kyoto and at Sumiyoshi Taisha Shrine in Osaka. People practiced hina-nagashi, a custom in which straw hina dolls were set afloat on a boat and sent down a river and out to sea, the idea being that they carried away bad spirits.

The earliest record of displaying the dolls in March comes from 1625, when Emperor Go-Mizunoo’s daughter played with dolls. She succeeded her father as Empress Meisho and Hinamatsuri became the official name for the holiday in 1687.

Doll-makers made elaborate dolls for the festival. As the dolls became more expensive, levels were added to the hinadan so that the expensive ones could be placed out of the reach of young children.

Families start to display Hinamatsuri dolls in February and take them down immediately after the festival. Superstition says that leaving the dolls on display past March 4 will result in a late marriage for the daughter.

The attention to detail that is visible in a Hinamatsuri display is impressive. Different regions of Japan place the dolls in different orders from left to right, but the type of dolls displayed on each level are always the same.

The top level always displays the Emperor and the Empress. There might be extra details on this level, such as silk lanterns decorated with cherry blossoms. Hinamatsuri purists would place two vases of artificial peach branches between the two dolls. The traditional Kansai arrangement had the male on the right, while modern Kanto arrangements place him on the left.

The second level holds three court ladies, each holds sake equipment. The lady on the right is the long-handled sake-bearer Nagae no chōshi, the on the left is the backup sake-bearer Kuwae no chōshi, and the lady in the middle is the seated sake bearer Sanpō. Accessories between the ladies include stands with round tabletops for seasonal sweets.

The third level has a musical theme—it holds five male musicians holding instruments including a small drum, a large drum, a hand drum and a flute, and a singer holding a fan. There are ancient Hinamatsuri sets with up to ten musicians, with at least one with female.

Two ministers may be displayed on the fourth level. These may be the Emperor’s bodyguards, or administrators. They are sometimes carrying a bow and arrow. When they represent ministers, the Minister of the Right is depicted as a young person and the Minister of the Left is older. Between the two figures are covered bowl tables as well as diamond-shaped stands bearing hishi mochi, a Japanese sweet made specially for Hinamatsuri. Just below the ministers on the right is a mandarin tree, and on the left, a cherry blossom.

The fifth level displays three protectors of the Emperor and Empress. They are all having a different experience of being drunk—one is crying, one is angry, and one is laughing. The sixth and seventh levels are less psychologically charged. These levels display a variety of miniature furniture, tools and carriages. The furniture depicts items used in the palace including a chest of drawers, a chest for kimono storage, a sewing kit and utensils for a tea ceremony. The seventh layer displays items used away from the palace such as an ox-drawn carriage and a picnic hamper.

Last year an 81-year-old woman called Masako Wakamiya developed a game app called Hinadan App. The game challenges players to sort all of the hina dolls into their rightful place on a hinadan. You can watch a TED talk of Masako Wakamiya here. 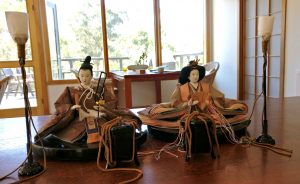 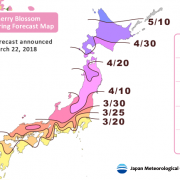 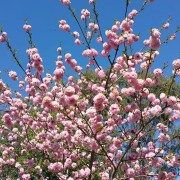 The health benefits of a Japanese diet