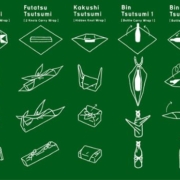 Furoshiki are traditional Japanese wrapping cloths made of squares of silk or cotton. The custom of furoshiki wrapping dates back to Nara period, when cloths were used to wrap and transport precious temple objects.

The term furoshiki originated during the Muromachi period when the Shogun Askikaga built an onsen (a traditional Japanese bath-house) and invited the lords to visit. The royal guests packed their belongings in silk cloths decorated with their family crests.

During the Meiji period common folk were allowed family crests, and furoshiki grew in popularity. In the Edo period public bath-houses (sento) became widespread and furoshiki was used as a mat to stand on while undressing, and a wrapping cloth to carry the clothes. The term furoshiki is a combination of furo meaning bath and shiki meaning to spread. (The Japanese equivalent of an Aussie standing on their towel in the beach carpark.) 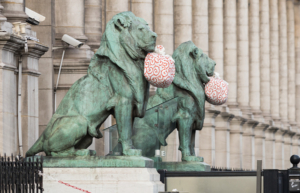 Furoshiki wasn’t just confined to the bath-house. Furoshiki became a way for merchants to carry their goods. Furoshiki usage declined after the introduction of paper and plastic bags to shoppers in Japan. But interest in furoshiki has exploded over the last couple of years as more people around the world forgo giftwrapping in favour of zero waste alternatives.

Furoshiki celebrates the Japanese principle of mottanai—a sense of regret over wasting anything. Making the most of the Covid lockdown, Catherine, the owner of Shizuka Ryokan, continued Shizuka’s mottanai quest by repurposing old yukata guest robes. Catherine saved squares cut from the cotton robes to make furoshiki. Shizuka chef Yuchan then used these DIY furoshiki to wrap take away meals.

Get inspired watching a video of a staff member at Kakefuda Kyoto, a famous furoshiki store in Kyoto, demonstrating the different ways to fold a 105cm square of fabric. The video even claims that Mick Jagger purchased a furoshiki from the store.

Download an infographic from the Japanese Ministry of the Environment depicting 14 ways to fold a furoshiki.